Central Anatolia can be summed up in a two simple worlds, Turkey’s heartbeat. This large and cultural centre of Turkey is littered with thousands of years old history, this land has been fought over by numerous tribes, races and empires leaving the area with a perfect mix of ancient cities, caravanserais, modern cities, moonscape terrain, Ottoman mansions and amazing cuisine.
The region has history dating back as far as 7500 BC in Çatalhöyük, near Konya, where the oldest settlement in the region has been discovered. Central Anatolia was the first major state of the Kingdom of the Hittites who rules the land for quite some time. The region was constantly under attack from all sides and what run over by Alexander the Great and his army on his conquest through to India. The Romans and Byzantines also occupied the land and are of special existence in the Cappadocia region making use of the natural landscape to house their spectacular churches and underground refuges from the oppressing persecutors. Following this period the Turkic tribes from the east began to enter the lands eventually uniting to form the Seljuks (Sultanate of Rum). The Sultanate then began to dissolve and was eventually overtaken by the 2nd largest Empire the world has ever seen, the Ottoman Empire. 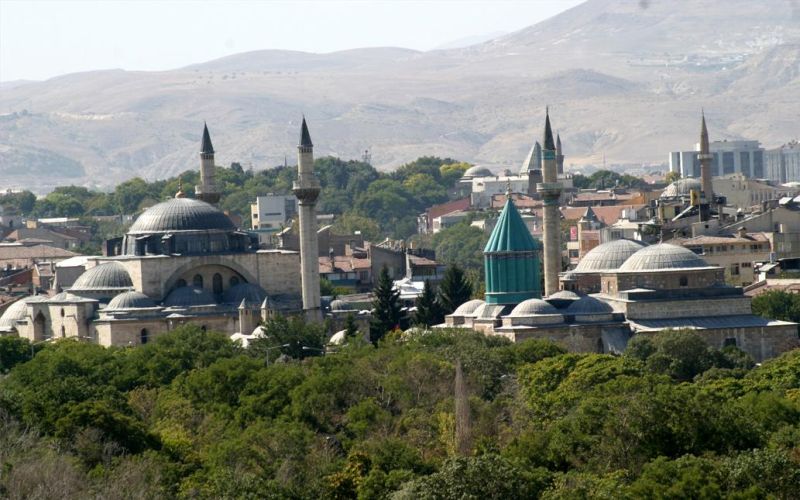 Places to visit in Central Anatolia

Ankara: The nation’s capital, Ankara is a thriving city with a mix of government workers, university students, bankers and doctors populating the city. Most embassy’s lay here along with a few notable tourist attractions. Situated on the hilltop overlooking the city is Ankara Castle and the old town inside its walls. The Museum of Anatolian Civilizations is situated beneath the castle walls and is home to the largest collection of Hittite artefacts in the world. Ankara became the capital after the Republic of Turkey was founded by Mustafa Kemal Atatürk in 1923 and so it is fitting that his Mausoleum (Anıtkabir) is situated in the city. His tomb lies beneath and impressive monument which is reached by and long avenue. Anıtkabir is a worthy stop whilst in the city and if you have the opportunity, every 2 hours they have the changing of the guard ceremony.
A notable day trip from Ankara is that of Hatuşa, the ancient the capital of the Hittite Empire over 2300 years ago.

Aksaray: One of the 5 provinces of making up Cappadocia, Aksaray city itself does not offer much to the traveller. On the outskirts however lay some of Cappadocia’s most famous sites. Places of interest include Tüzgöl (Salt Lake), Ihlara Valley, Mount Hasan, Ağzıkarahan (Caravanserai) and Selime Monastery.

Beypazai: One hour from the Capital, Beypazari is a beautiful town with historical houses from the Selcuk and Ottoman periods. Also located in Beypazari is Inozu Vadesi (valley), a bird-watchers paradise where one can see the majestic hawk and bald eagle.

Eskişehir: The name translating to ‘Old City’ can become quite humorous as this city is thriving with Turkeys youth. Home to two of Turkey’s largest Universities, Eskişehir is often referred to as ‘Student City’. The city offers minimal yet significant places of interest. The city has been occupied since the Phrygian period and one rock carving, sacred to the mother Goddess of the Phrygians remains intact today (Yazılıkaya). 19th century, original housing also still stands in the city and is one of the best examples of this fine architecture the country has to offer.

Kayseri: Another province of Cappadocia, Kayseri is famous for its Mant (Turkish Raviolli), Pastırma (dried, salted beef) and Iskender kebab. However food is not the only impressive product Kayseri has to offer, the city is almost famous for its hand woven carpets. The old city itself houses some impressive Seljuk buildings including the Hanat Hatun Mosque, Ulu Mosque and the market buildings of Bedesten and Vezir Hanı. Venturing out of the city to the south of the Kayseri Province you can find some of the area’s most natural playgrounds.

Kapuzbaşı waterfalls are spectacular, the wild freezing cold water spurts straight from the rock face, enjoy the day in one of the many picnic areas. Erciyes Mountain is also another adventure lover delight in the Kayseri region. Enjoy hiking in the summer or snow sports in the winter.

Konya: Well known for being one of Turkeys most conservative cities, Konya is also the 7th largest. The former capital of the Seljuks, the city is therfor home to some impressive Seljuk architechture. However the city is most famous for its link to the poet and sufi, Rumi. The Mevlana Museum is worth a visit while in Konya. Rumi’s tomb can be found here along with a museum full of Islamic artifacts, along with examples of the order of Mevlana.
The city also has some notable mosuqes such as Iplikçi and Alaaddin, there is also an operating Catholic Church dedicated to St. Paul for those who are following Christian history throughout Turkey.

Kütahya: A lesser known part of Central Anatolia, Kütahya is most famous for its colour porcelain tiles. However the Temple of Zues at Aizanoi is perhaps on the the best preserved Roman temples in Turkey and is well worth the visit.

Nevşehir: The capital of Cappadocia, the Nevşehir province is home to most of the major tourist attractions of Cappadocia.