While the scenery of the Aegean coast is not as spectacular as that of the Mediterranean, this is the part of Turkey that was once Asia Minor and it is studded with fantastic historic sites, including the ruins of Troy, Ephesus and Pergamum. This is also where you come to see the battlefield sites at Gallipoli. From the Gallipoli Peninsular as far south as Bodrum the Aegean Coast offers sea-side, cultural and historical splendours for the traveller. The capital of the area is undoubtedly Izmir, the 3rd largest city in Turkey. Sitting on a harbour this city has a history dating back to 3000 BC. Izmir is also known as a very multi-cultural city with a very rich Greek history. 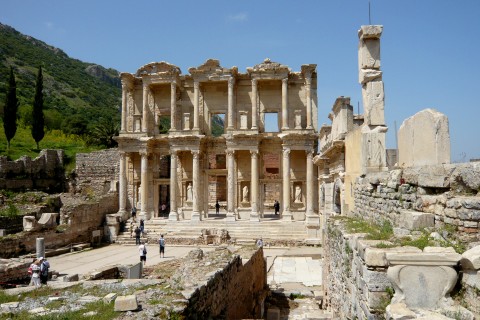 Places to visit on the Aegean Coast

Assos: A pleasant village with preserved architecture and impressive Temple of Athena overlooking the Aegean. This small village was once a retreat for famous artists. There is also an ancient theatre and a very well preserved Ottoman bridge in Assos.

Bergama: Located near the ruins of the ancient city of Pergamon. Pergamon is an impressive ancient city, the capital of the Kingdom of Pergamon with the acropolis sitting high at the top of the hill overlooking the city. Pergamon is home to the steepest theatre of the ancient world and the altar of Zeus (although this resides in Berlin). Bergama is home to many important ruins including that of the Asklepion, an old medical complex, thought to be the first place where the symbol of the snake was associated with medicine. Here you can also see the Temple of Serapis, built for the Egyptian Gods in the 2nd century AD; this was later turned into the Church of St. John and is one of the Seven Churches of Revelation.

Bodrum: Nice and trendy resort known for its castle and party atmosphere it is also the site of one of the Seven Wonders of the Ancient World, The Mausoleum at Halicarnassus. The Castle of St. Peter is also the city’s stand out landmark, built in the 15th century by the Knights Hospitaller to prevent invasion from the Selçuk Turks.

Denizli: Is an inland city serving as a hub to Roman sites such as Pamukkale, Hierapolis, Aphrodisias in south-eastern Aegean Region. Just a three hour drive from the coast, this small area has some very rich history. Pamukkale was the most visited site in Turkey in 2014.

Ephesus: Situated a few kilometres from the town of Selçuk, Ephesus is an ancient Greek city built in the 10th century BC which later became the third largest Roman City outside of Rome. Ephesus is also one of the Seven Churches of Revelation. Estimated that only 15% of the city has been uncovered it features the facade for the largest library of the ancient world, the first known form of advertising, ancient toilets with running water and a theatre thought to be able to seat 25,000 in its day.

Selçuk: Selçuk is a town only 20km from the resort town of Kuşadası. Home to the ancient site of Ephesus this village is visited by thousands of tourists each year. Other important sites include the Temple of Artemis, one of the Seven Wonders of the Ancient World; the House of the Virgin Mary, believed to be the final resting place until her Assumption; Basilica of St. John, believed to be the final resting place of the Saint after he travelled to Ephesus to speak the word of his Lord Jesus Christ. Şirince is also located up the hill closely to Selçuk; this small village is famous for fruit wine and was involved in the 1923 population exchange between Turkey and Greece, showcases Greek Architecture and a Church in the same of St. John the Baptist.